2022 INSTALLATION – In this new series My Taj Mahal, I investigate my identity, raised in the United States with a father who was not only an Islamic immigrant from India, but British India where he identified as British in so many ways and being an industrious immigrant believed wholeheartedly in the American Dream.  My mother grew up in Yankee New England and was a no nonsense, do it yourself, kind of person. I find myself “Negotiating these contradictions” in my identity, questioning traditional women’s roles and yet at the same time so desperately trying to fulfill them.

This work is a collage of personal short stories, video vignettes that are reflective and poignant. A collage of drawings, photos and maps of choices ( karma) and one’s calling (dharma), inform the video work.

I explore the contradictions of being Indian and feeling tied to the traditional female role and at the same time being American, of a certain socio-economic class, who has the privilege of choice. I have agency, because of where I was born and although throughout my life I have felt marginalized and invisible often, this journey through life has brought me self awareness, empowering me to be my authentic self.

At the core of a mixed ethnic (marginalized) identity one inherently is concerned about social justice issues, having understood the position of non-inclusive intrinsically in one self. As a researcher, activist, engineer and artist I seek to combat cultural conformity. How does one combat the generalized representation of cultural identity under the prevalence of the mass media? We have all felt pressure to conform to norms and suppress our authentic selves, how do we become more self aware?

My hope when creating work is that viewers have the courage to reflect on their own path, their family traditions, and consciously decide what works for them and what needs to be discarded. Becoming self aware, is a lifetime of inquiry, and if one is lucky enough to have a “seat at the table” because of the privilege of where they were born, or what family they were born into, then to be our best selves we need to extend the seat at the table to marginalized others who do not have that privilege; to make visible the marginalized.

Four videos were embedded into the Taj Mahal Installation – see below for details of each video. 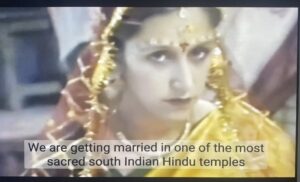 CLICK THE IMAGE TO PLAY – Untying the Knot: The Indian Doll OR the American Rebel? 2022 –  Video Short. We are getting married in one of the most sacred South Indian Hindu temples, Tirupati, dedicated to Venkateswara, a form of Vishnu. I can’t help but think, why aren’t we in a goddess temple, who picked a temple dedicated to Vishnu? The Sri Venkateswara Swami Vari Temple is in the hill town of Tirumala at Tirupati in Chittoor district of Andhra Pradesh, India. Why aren’t we getting married in a temple dedicated to Lalitha, isn’t this the goddess I studied and learned so much about, remembering her 1008 names (the Lalitha Sahasrananaama) – spending the last two years learning sanskrit? We were going to name our first daughter after one of her names, we had already chosen Kathyayani. His family actually didn’t like the name, they said it was an old traditional vedic name, they wanted us to choose a modern Indian name. We were adamant though, we knew what we wanted, we knew what parts of the Indian traditions we wanted to keep and what we wanted to discard. 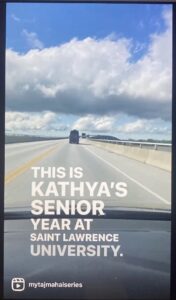 CLICK THE IMAGE TO PLAY –  Saint Lawerence University: Parent Weekend 2021 – Video Short. Ten years after Prakash and I divorce, we are making one of our many drives to our daughters university in update NY, a 6 hour drive each way… This time is different though, we drive separately.  I feel a certain nostalgia on this road, I just counted I have driven from Amesbury, MA  to Canton, NY 7 times. It reminds me of how Prakash and I we used to drive back and forth between Rochester NY and Boston, when we first met before marriage.  Those drives which seem so long and so long ago, seem special now. I remember sometimes by myself on that drive trying to remember the Lalitha Sastranamum: the 1008 names of the Goddess, of which Kathyayani is one of them.

CLICK THE IMAGE TO PLAY – Sufi Soccer Mom 2012 – Video Short. This performance video work is a deeply personal and yet very public as she engages in self-examination to express her desires, frustrations and ideological views as an American mother and a South Asian diasporic artist. This three channel video performance explores the differences within her cultural identity as an Islamic-American woman where she questioning the dominant ideology around domesticity, hysteria and the body in the West. 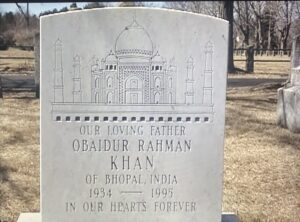 CLICK THE IMAGE TO PLAY – My Father’s Taj Mahal 2015 – Video Short. I will explore two aspects of my father’s life. First his hopes, dreams and issues of emigrating from India to the United States. And secondly, on a more abstract level, why my father, growing up in British India, takes on the views and values of the colonizer. Looking at the many meanings of the Taj Mahal and what it meant to my father. And then ask the larger question: how does meaning get manufactured and who more importantly has the power to produce it?