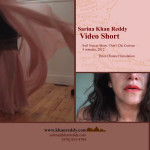 Sarina Khan Reddy’s latest performance video work is a deeply personal and yet very public as. She engages in self-examination to express her desires, frustrations and ideological views as an American mother and a South Asian diasporic artist. This three channel video performance explores the differences within her cultural identity as an Islamic-American woman where she questioning the dominant ideology around domesticity, hysteria and the body in the West.

She uses straightforward video, setting up a stationary camera and filming herself Sufi dancing, whirling, sensual movement and open eye meditation, braking the 4th wall in film and returning the gaze. She appropriates, short clips from mass media, for example the Brady Bunch to disrupt the meditative performance. She juxtaposes this with her life as a middle class mother raising children, disciplining, and meeting the mundane responsibilities of running a household. Across the three three screens a subversive ticker tape runs, questioning motherhood and self exploration.

Growing up in a dual household with a traditional Indian father and a puritanical, Yankee, reserved new England mother, she later became interested in the mystical aspects of her Indian heritage. She spent over a decade exploring the Sufi tradition as well as becoming an initiate of the South Indian  tradition, Sri Vidya and learning the complex rituals associated with it. Both of these traditions emphasis the notion that self-realization is through the body, that exploring the longing and desire buried deep in every human heart is done by opening the heart and letting the body lead, not the mind or ego. In many Eastern philosophies the body is considered the Devine, in the West it is often objectified.

She raises the questions: Can a middle class American mother reconcile the conflict of the culture of a “Soccer Mom” with a deep inner calling to explore consciousness through the body? Does she have time? Will she feel guilty? Can she attend to domestic duties, career, motherhood and inner callings? Does she need safety and certainty? Can we try to live outside or our cultural ideology and its imposed morals?

“The Great Game: A New World Order?” – British Colonial Installation: This installation functions on three different levels. Firstly, to draw parallels between the British Colonial Imperialism of the past and the “New World Order” of today. Secondly, to raise the attention of the passive viewer who may watch documentaries from the comfort of their living room. Thirdly, on a personal level, the artist is looking at her desire for the nostalgic, romantic crafted image of the British Royal Era. She is questioning her reproduction of an era through the sensual atmosphere of a British Colonial living room and questioning the aesthetics of her consumption? The items within the installation are an important part of the artist and her extended family’s homes. Most of the sepia photos are of the artist and her family.