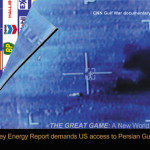 Click on the image to see the full Video – The Great Game: A New World Order?” is a three channel video which explores the new colonization embodied in globalization. Through comparative strategies, the viewer is asked to examine the differences between the current glorification of US war technology, the past glory of the British Empire and the glamorization of the 3rd Reich as expressed in the Nazi propaganda film, “Triumph of the Will”. While growing up under British India, the artist’s father not only loved the British style but was also seduced with its glory. After immigrating to the US, he was very critical of the American imperialist agenda, while maintaining a good deal of nostalgia for British India. Khan Reddy finds herself questioning some of these same contradictions. She raises the questions: Does longing to identify with a discredited history negate the understanding of critical issues? Is the nostalgic fetishization of the British Royal Era the same as the festishization of war technology? (4 minutes).